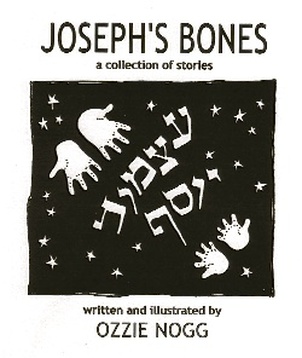 From magical marbles and gifts from the Czar, to snow angels and the
Angel of Death, the stories in Joseph’s Bones speak of perseverance, disappointment, hope and joy.
Ordinary stuff, common to all of us, no matter what our background.

Here’s what they’re saying about Joseph’s Bones:
Readers of Joseph’s Bones will not only enjoy the charm of Ozzie Nogg’s writing. They will be transported along with her to sweet reminiscences of life with their own families in days gone by. This book is a delight; it informs and inspires. Do not be misled by its small size; its message is one of love, tenderness and joy writ large. You will want to read it more than once.”
Rabbi Jules Harlow, Editor & translator of Sim Shalom, the Conservative Movement’s prayer book

“ . . . One of the most moving, well-written memoirs of life in small Jewish communities, Joseph’s Bones is a wonderful read. I laughed, I cried, I loved it! This honest, intimate work proves that Ozzie Nogg is Omaha’s gift to Jewish literature.”
Dr. Ron Wolfson, Vice President, University of Judaism in Los Angeles


an excerpt from
IN THE END

As newlyweds, Poppa and Momma make a pact. He'll die first since he is, after all, fifteen years older. But it doesn’t work out that way.
In her sixty-fifth year, with little warning, Momma reneges on her part of the bargain. Poppa agrees to come live with me.
“I’ll be dead in a month,” he says. “You’ll see. Without her I won’t last a month. Six weeks, tops. I’ll be out of your hair in no time.”

Six weeks, six months, ten months later, Poppa is still in fine fettle. Strong as an ox. Sleeping on the pullout couch in my den, fully dressed with his hat on.
“I need to be ready,” he explains.

On Momma’s one-year yarzheit, Poppa knocks back his breakfast shot of Wild Turkey, and mutters, “Where is he, the delinquent?” and starts hunting for the Angel of Death.